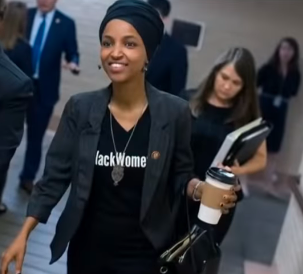 We hope the following can help us make a change: Congressman Gregory Meeks, Chairman of the House Foreign Affairs Committee

Minnesota Congresswoman Ilhan Omar is the poster child of the radical Left.

From her advocacy of radical open borders policies to her hatred of American nation, Omar is the most radically anti-American politician in Washington, D.C.

We should not forget that in a viral video released back in 2019, Omar said that “some people did something” with regards to the 9/11 attacks.

Unlike America haters like Rep. Omar, patriotic Americans KNOW who perpetrated the 9/11 atrocity that left over 3,000 Americans dead. They were 19 members of the Islamic terrorist organization Al-Qaeda. You can bet that Rep. Omar still has trouble coming to grips with this truth.

To make matters worse, Omar had the nerve to compare America and Israel  to Afghanistan, Hamas, and Taliban terrorists after the state of Israel clashed with terrorists in the Gaza strip back in early May.

She asserted that the U.S. and Israel have committed "unthinkable atrocities" and human rights abuses.

For a person who was brought to this country via America’s generous asylum program, Rep. Omar sure is ungrateful!

Ilhan Omar is one of the most dangerous and most radical up-and-comers in Congress, and it’s time for her to be held accountable for her anti-American rhetoric.

As a member of The Squad, Ilhan Omar is part of a new generation of radical leftist leaders who are working tirelessly to radically transform America in their own image. That means the Green New Deal,open borders, oppressive taxation, racial quotas, and subsidized housing are all on the menu should The Squad completely take over the Democrat Party.

America cannot afford to have Omar in a prestigious position such as the House Foreign Affairs Committee, let alone hold higher office.

Once you’ve added your name to the growing list of concerned Americans, please share the link to our “Kick Ilhan Omar Off The House Foreign Affairs Committee” petition with your friends who believe Congress is no place for a Congresswoman who uses her position to advocate for anti-American policies and morally equates America with terrorist organizations.

We, the undersigned, demand Congress kick radical Rep. Ilhan Omar for using her position of influence to attack America and her wonderful people! Her record in Congress speaks for itself– she has repeatedly used her position to spew anti-American vitriol and work against American interests, therefore she must be removed from office.