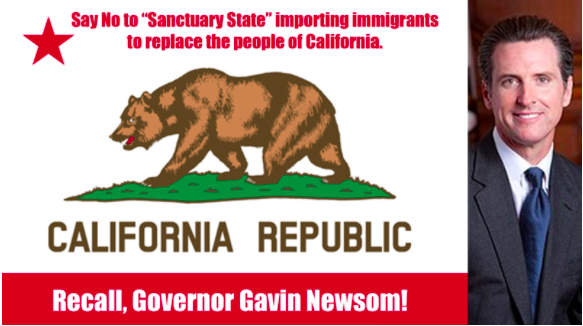 We hope the following can help us make a change: The People of California

Governor Gavin Newsom in addition to Governor Jerry Brown have declared California a Sanctuary State, importing illegal immigrants to replace the people of California, and give them California's tax payer funded goods and services in order to alter the voting demographics against Americans, and in favor of Democrats.

Californians did not vote for Sanctuary Cities, or for California to feud with President Trump to bring in illegal immigrants to replace Californian citizens.

Therefore, here is a petition to Recall Governor Gavin Newsom.  If you agree please sign the Petition.

Thank you for your time.  Make California Great Again!